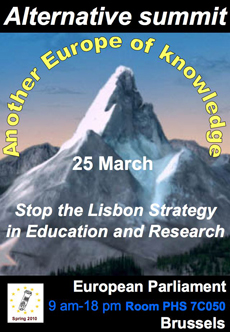 Our agenda Europe 2020 - A free knowledge based Europe

On March 25th-26th 2010, the Spring summit of the Heads of State and Governments of the European Union is marking the 10th year of the Lisbon strategy, which frames the policies currently conducted in the Member States so as to "modernise" national research and education systems (primary, secondary and higher education, adult learning).

In the Lisbon strategy, the declared ambition of a "knowledge based society" is reduced to the only capitalistic "knowledge market" whose harmful influence can be seen everywhere. The public research system is being dismantled and the grip of business tightened. Tuition fees are increased. Studying and working conditions are becoming increasingly precarious and citizens are pushed aside from the technical and scientific decisions that affect their lives. Instead of being met, the promise of a 3% of G.D.P investment in research ends up with dire budget cuts.

In our alternative summit today, almost 100 people (most of them representing various European organizations such as unions of higher education and research, students organisations, NGOs and political parties) coming from 13 different European member states have gathered in order to oppose the market-oriented European policy on higher education and research and to promote an alternative project. We believe that knowledge should gain more importance with the objectives to promote education and research as public goods, when it ensures that knowledge is available to all, when it allows citizens to express a rational critical analysis of the scientific and technical choices which are proposed to them and which shape our daily life.

While keeping in mind the challenges our planet and its inhabitants are facing in the 21st century, education (including higher education and lifelong learning) should strengthen citizens' ability to analyze our society and to participate actively in its further development.

For this purpose, we propose notably: free education for all, better studying conditions, no subordination of public research to business interests, to take more into account social needs, the respect of diversity in science, education and organisation, mobility of students and researchers as a right and not an additional pressure, free public knowledge, professional stability as well as academic freedom and democratic governance of higher education and research institutions.

In a larger context and in contrary to what the European Union proposes again with its "new" vision of Europe 2020, we should free our society from the globalised and generalised competition and financial market, and promote a new organisation of the international exchanges in economy, science, culture etc. based on the values of solidarity and mutual respect.